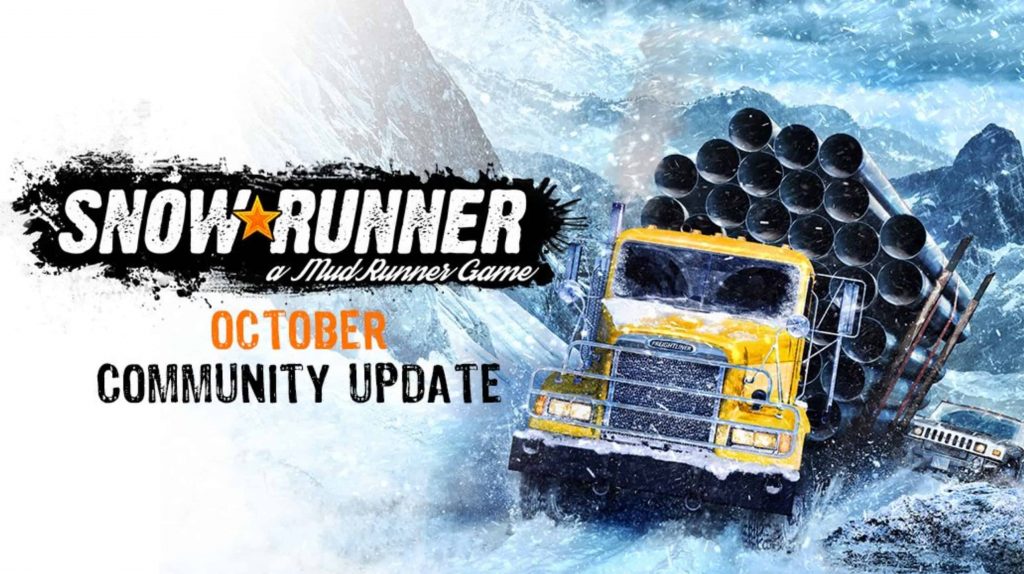 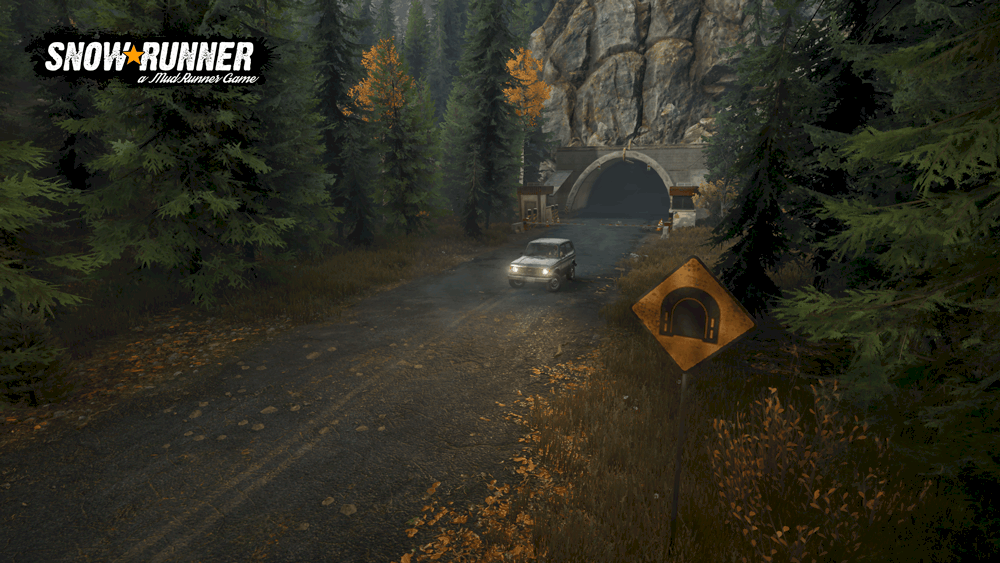 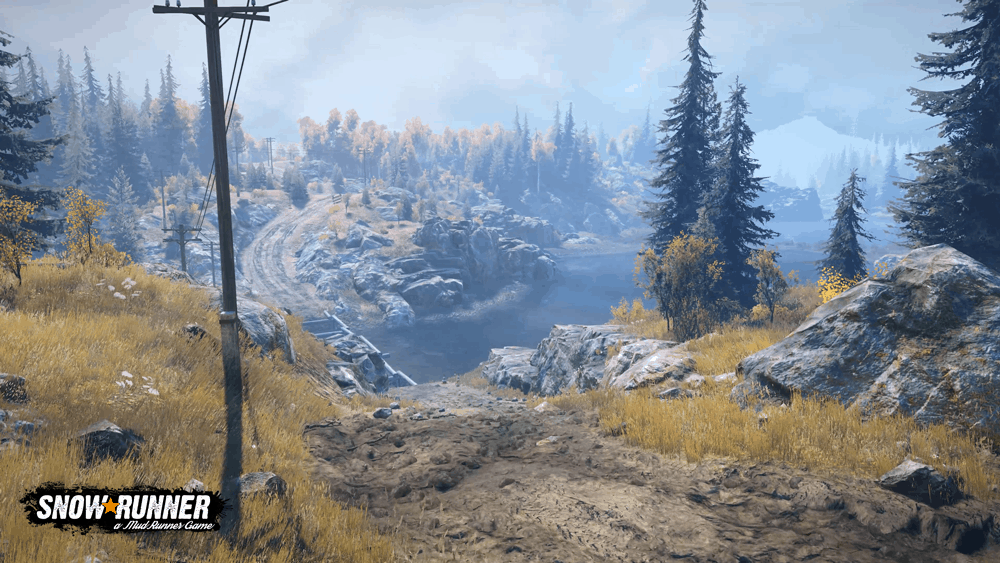 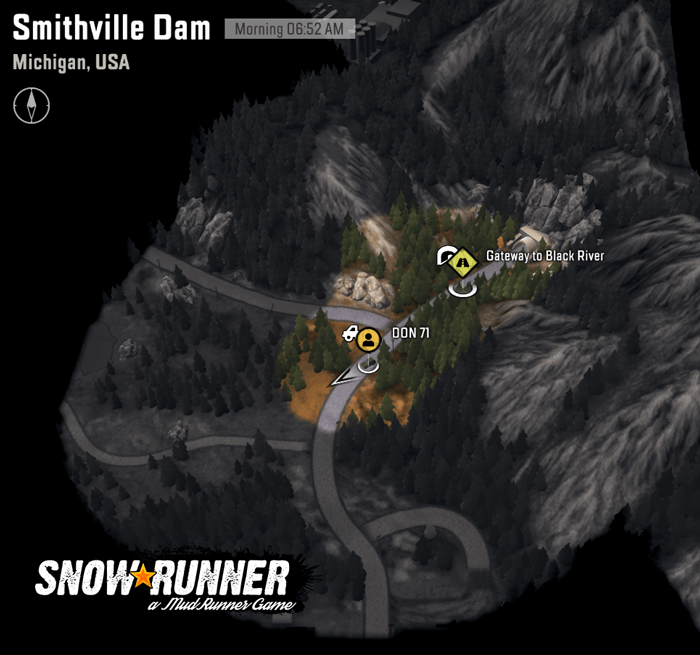 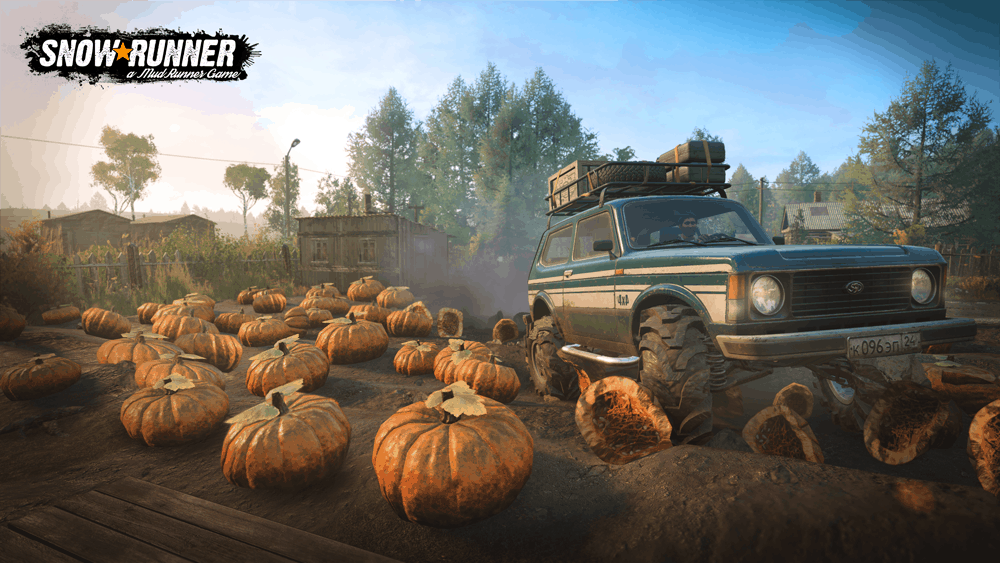 October is here, and we’re excited to bring you some insight into the development of SnowRunner, looking at what the team has been up to, and share some brand new screenshots, including a new vehicle presentation!

To celebrate the Fall Season, we’d like to show off some shots of Michigan, one of the three regions that you will explore when SnowRunner launches early next year. Each Region in SnowRunner is huge, spanning multiple maps, each of which is several times larger than the average MudRunner map.

Let’s go on a little journey!
A tranquil town next to a lake waits for supplies.
Bring supplies to the broken bridge to repair it and cross the river.

On top of being much larger, these maps are physically interconnected by tunnels. Exploration is an essential aspect of SnowRunner, so to pass from one map to another, you must drive to the edge of the map and use the gateway that leads to the next. Occasionally these will only unlock after you complete certain missions.

The map waits to be explored.

A lot of work has gone into map design and how players explore the wilderness in SnowRunner. Each region has its own flavor, music, and overarching backstory, which the player discovers over time as they complete tasks to repair, build, and resupply remote and untamed locations.

In Michigan for example, you will find tranquil border towns enveloped by a fireworks display of autumn leaves, flooded plains and bogs, and rocky mountains full of treacherous paths.

The team has also been working hard on the music of SnowRunner this month. You can expect the familiar, warm and weather-worn strings of blues guitar, but also regionally specific music and instruments that contribute towards making each area feel unique.

Of course, it wouldn’t be a monthly community update without at least one new vehicle presentation, so feast your eyes on the powerful Azov 64-131:
And in case you missed it sliding by, take a look at this sweet slippery GIF with the Don 71:
The season of spook has arrived, and nothing says Halloween like driving through a field of pumpkins.
We hope you’ve enjoyed this month’s update! We look forward to sharing more news and vehicles with you as we get closer to launching SnowRunner early next year.

Loading...
Who spintires the game?
Do you like to ride dirt tracks after, try your hand at cross-country competitions? Spintires game is for you. Complete your game with new maps, tractors, cars, trucks, download spintires mods free. The game features a lot of dirt, dirty vehicles and roads difficult to overcome. Good game...

This site uses Akismet to reduce spam. Learn how your comment data is processed.

We use cookies on our website to give you the most relevant experience by remembering your preferences and repeat visits. By clicking “Accept”, you consent to the use of ALL the cookies.
Cookie settingsACCEPT
Manage consent

This website uses cookies to improve your experience while you navigate through the website. Out of these, the cookies that are categorized as necessary are stored on your browser as they are essential for the working of basic functionalities of the website. We also use third-party cookies that help us analyze and understand how you use this website. These cookies will be stored in your browser only with your consent. You also have the option to opt-out of these cookies. But opting out of some of these cookies may affect your browsing experience.
Necessary Always Enabled
Necessary cookies are absolutely essential for the website to function properly. This category only includes cookies that ensures basic functionalities and security features of the website. These cookies do not store any personal information.
Non-necessary
Any cookies that may not be particularly necessary for the website to function and is used specifically to collect user personal data via analytics, ads, other embedded contents are termed as non-necessary cookies. It is mandatory to procure user consent prior to running these cookies on your website.
SAVE & ACCEPT